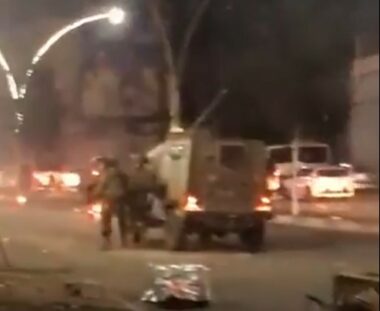 Israeli soldiers attacked, on Friday evening, dozens of Palestinian protesters who were holding a procession in solidarity with the hunger-striking detainees, in Hebron, in the southern part of the occupied West Bank.

Media sources said the Palestinians marched at Hebron’s northern road while carrying Palestinian flags and pictures of the hunger-striking detainees in Israeli prisons, and chanted for their freedom.

They added that the soldiers attacked the nonviolent protesters with rubber-coated steel bullets, gas bombs, and concussion grenades, causing dozens of injuries.

It is worth mentioning that, on Thursday, Israel reactivated the arbitrary Administrative Detention order against Miqdad al-Qawasma, who is facing a life-threatening condition but is ongoing with the hunger strike he began 109 days ago.

Al-Qawasma is among five other detainees who are continuing with the hunger strike, including Kayed al-Fasfous who started the strike 114 days ago.

The other administrative detainees who are ongoing with their hunger strikes are Ala’ al-A’raj, who started the strike 90 days ago, Emad Abu Hawwash, 81 days ago, Ayyad al-Hreimi, 44 days ago, and Lu’ay al-Ashqar, 28 days ago.