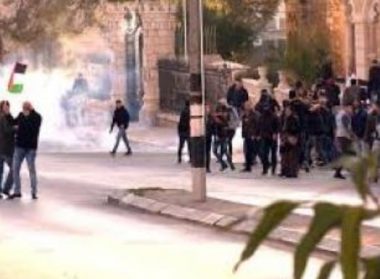 Israeli soldiers attacked, Wednesday, many students who marched in Bethlehem city, in the occupied West Bank, and abducted four.

The Palestinians marched from Bab az-Zqaq area, heading towards Jerusalem-Hebron road, before reaching the northern entrance of Bethlehem, where the soldiers started firing gas bombs and concussion grenades at them.

The soldiers then chased and attacked many protesters, abducted four students, and took them to an unknown destination.

In related news, the soldiers attacked many students, who marched in the al-Lubban ash-Sharqiya village, south of Nablus, and fired gas bombs and concussion grenades at them, causing many to suffer the effects of teargas inhalation.

The soldiers also installed a military roadblock at the main entrance of the village, and prevented the Palestinians from entering or leaving it.

Furthermore, the Palestinian Prisoners Society (PPS) has reported that Israeli soldiers abducted, overnight until dawn hours, at least 29 Palestinians, including one woman and several children, in various parts of the occupied West Bank.

On Wednesday morning, the soldiers killed, a young Palestinian man, identified as Hamza Yousef Zama’ra, near Karmei Tzur illegal Israeli colony, which was built on Palestinian lands in Hebron, after he reportedly stabbed and lightly injured a guard.

The soldiers later conducted invasions into nearby villages, and carried out violent searches of homes and property, before injuring many Palestinians.

The army also detained and interrogated Hamza’s father, and released him later.