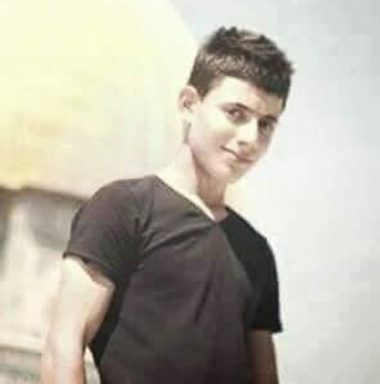 Israeli soldiers killed, on Wednesday morning, a young Palestinian man near Karmei Tzur illegal Israeli colony, which was built on Palestinian lands in Hebron, after he reportedly stabbed and lightly injured a guard. The soldiers later conducted invasions of nearby villages and violent searches and injured 29 Palestinians.

The Palestinian District Coordination Office (DCO) has confirmed to the Health Ministry that the slain Palestinian has been identified as Hamza Yousef No’man Zama’ra, 19, from Halhoul town, north of Hebron.

Israeli sources claimed that the Palestinian “very lightly wounded the guard in a stabbing attack in Karmie Tzur.” The wounded Israeli guard was identified as Boris Balbrava, 36, from Karmei Tzur colony.

They said that Zama’ra “arrived by car at the security post leading to the settlement, and attacked a guard directly after exiting the car,” and added that he stabbed a guard in his hand, causing very minor wounds, before another guard shot him dead.

Following the incident, dozens of soldiers arrived at the scene, and initiated an extensive search campaign, reportedly to locate “possible accomplices.”

The soldiers later invaded Hamza’s home, and violently searched it, before interrogating his family and abducting his father. They released the father later, and summoned two of his sons for interrogation in the Etzion military base, north of Hebron.

Following Hamza’s death, dozens of Palestinian protested in Halhoul, before the soldiers attacked them, and fired dozens of live rounds, rubber-coated steel bullets and gas bombs.

Medical sources in Hebron said the soldiers shot at least 29 Palestinians with live rounds and rubber-coated steel bullets and caused many to suffer the severe effects of teargas inhalation, in addition to assaulting three with clubs and batons.

It is worth mentioning that Hamza is a former political prisoner and has two brothers who are imprisoned by Israel.

He is the third Palestinian to be killed by Israeli soldiers in the occupied West Bank, within 24 hours, after the soldiers killed Ahmad Jarrar, near Jenin, and Khaled Waleed Tayeh, in Nablus.