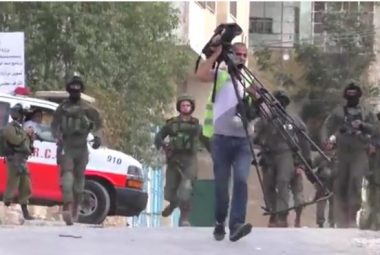 Israeli soldiers attacked, Friday, the weekly procession in Kufur Qaddoum village, east of Qalqilia, in the northern part of the occupied West Bank.

Morad Eshteiwi, the media coordinator of the Popular Committee in Kufur Qaddoum, said the soldiers tried to ambush the protesters near the new water reservoir of the town, but were unable to abduct any of them.

He added that the soldiers verbally and physically assaulted many journalists, and chased them away, to prevent them from documenting the unfolding assault against the protesters.

The Israeli attack led to clashes between the soldiers and many local youngsters, who hurled stones at the army, while the soldiers fired gas bombs and rubber-coated steel bullets.

The procession started following noon prayers in the village, and was attended by dozens of Palestinians, accompanied by Israeli and international peace activists.

The villagers hold weekly protests against Israel’s illegal colonies, and demanding the army to reopen the main road, which was closed more than 14 years ago, to enable easy access to the colonists, living in Kidumim colony, built on illegally-confiscated Palestinian lands.