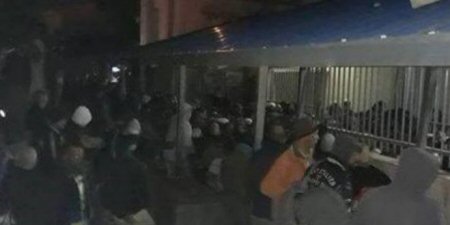 A number of Palestinian workers suffered injuries, suffocation and fainting on Sunday morning, as a result of the Israeli occupation forces’ assault, as they were passing through the military checkpoint north of Bethlehem, in the southern occupied West Bank.

According to eyewitnesses, Israeli soldiers attacked the lines of the workers who were waiting at the 300 checkpoint between Bethlehem and Jerusalem while they were going to work in Jerusalem.

The space was overcrowded with workers as the soldiers attacked the workers, resulting in many cases of suffocation and bruising.

PNN further notes that the workers face daily suffering at the occupation barrier to the north of Bethlehem, and workers often struggle as a result of the crisis caused by the Israeli occupation forces to inspect workers and check the permits of workers inside.

Head of the Palestinian Trade Union Federation, Shaher Saad, condemned the assault on the Palestinian workers who have used the checkpoint to reach their places of work since 1948.

Saad held the occupation government responsible for the lives and safety of the workers, because these actions endanger their very lives as they make their way to workplaces fraught with such risks.

Saad issued an urgent protest letter to the International Labor Organization, demanding an urgent investigation into the violations committed by Israel against Palestinian workers and obliging them to apply international labor standards to Palestinian workers, as an occupying power. and to provide stable and durable work, in a safe and risk-free work environment, to the inhabitants of the territories it occupies.