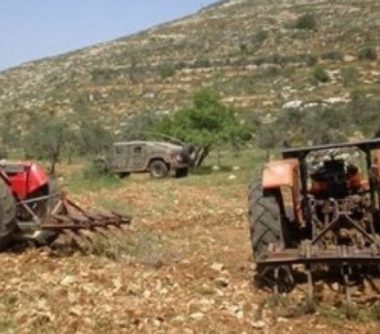 Israeli soldiers prevented, on Saturday evening, a Palestinian farmer from plowing and working on his own land, and confiscated a bulldozer working on the land, in the al-Mintar area, in Kafr Thulth town, south of the northern West Bank city of Qalqilia.

Hosni Odah, the mayor of Kafr Thulth, said the soldiers confiscated a bulldozer, owned by Ayman Ahmad Mara’ba, who was working on lands owned by Abdul-Latif Hasan Arar, who hired him to do the job.

Odah added that the soldiers forced the Palestinians out of the land, and closed with sand hills the agricultural road linking between Azzoun and Kafr Thulth and leading to al-‘Oyoun area in Wadi Qana.

It is worth mentioning that the road was recently opened to provide the Palestinian farmers an easier access route to their farmlands and orchards.