Soldiers Interrogate A Child In Her Home In Jerusalem 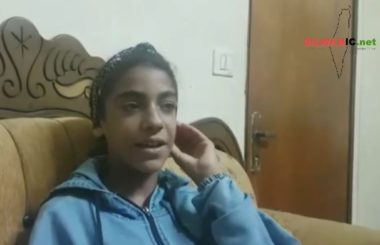 Israeli soldiers invaded, on Saturday evening, a Palestinian home in the al-‘Isawiya town, in occupied East Jerusalem, and interrogated a child in the property, after alleging that she was filming them when some youngsters reportedly hurled stones at their jeep. The child and her family were on the rooftop of their home barbecuing with relatives.

The Wadi Hilweh Information Center in Silwan (Silwanic) interviewed the child after the soldiers left her home, and she told them that the soldiers started interrogating her and asking her if she saw who threw stones at them and if she filmed it on her phone.

The child, Sondos Omar Atiya, 12, denied the allegations of the soldiers, and that she was on the rooftop with her family and relatives barbecuing and socializing.

“One of the soldiers was asking me if I was wearing a black shirt and filming them – he asked if I had a phone, or if I was using my brother’s phone – I said no,” she told Silwanic, “They kept questioning and interrogating me, asking whether I filmed anything or if I saw who threw stones at them… and my father told them that the family is just having some barbeque.”

The soldiers then examined several phones, and questioned her father, before leaving the property.