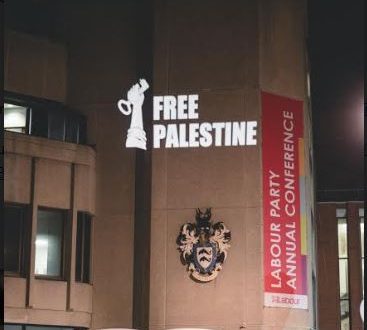 On the eve of the Labour Party’s 2019 annual conference, the venue was illuminated by projections of a Palestine flag, alongside the slogans “Free Palestine,” “Solidarity with Palestine” and “Freedom, justice and equality”, as part of a creative stunt by Palestine Solidarity Campaign (PSC).

A motion expressing support for the people of Palestine, including a commitment to upholding international law, in relation to the UK’s trade with Israel, and to oppose Trump’s “Deal of the Century,” is featured in the conference ballot, and PSC is encouraging delegates to prioritise and vote for the motion.

PNN further reports that the creative stunt comes one year on from a display of solidarity, at the 2018 annual conference which saw the hall filled with a sea of Palestinian flags as a motion in support of Palestinian rights was passed resoundingly. Campaigners are seeking to ensure that Palestine stays on the agenda of conference floor, this year.

Campaigners say that, in the face of unprecedented attacks on the collective rights of the Palestinian people, by the Israeli state, with support from US president Donald Trump, international solidarity is needed now more than ever.

A similar motion to that being brought to conference was passed overwhelmingly at TUC Conference, earlier this month, in a reaffirmation of the trade union movement’s solidarity with the Palestinian people in their struggle for justice.

Ben Jamal, Director of Palestine Solidarity Campaign, said: “Last year’s conference displayed solidarity with the Palestinian people inside the conference venue, and, this year, we’re displaying it on the outside too. We’re doing this to stress that, in the face of the most serious assault on their collective rights from Israel, supported by the Trump administration, the Palestinian people need the support of the international community. With the Israeli state determined to continue and intensify its violations of international law and human rights, we must say, louder than ever, that the labour movement stands with the people of Palestine in their struggle for freedom, justice and equality.”

Soldiers Abduct Six Palestinians, Including Father And Son, One Woman, In Jerusalem