Soldiers Demolish A Shed, A Room And A Water Tank, Near Tulkarem 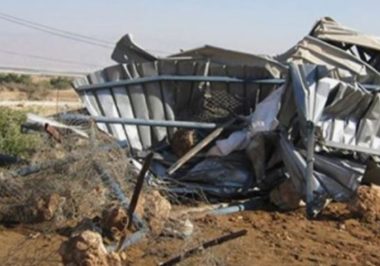 Israeli soldiers invaded, on Monday morning, Palestinian farmlands lands in Qaffin village, north of the northern West Bank city of Tulkarem, and demolished an agricultural shed and a room, in addition an under-construction room and a water tank.

The landowner, Nizar Abdul-Rahim Ajjouli, said he was surprised to see many army jeeps and soldiers accompanying a bulldozer into his farmland, east of the village.

He added that the soldiers then demolished his agricultural shed and a room, in addition to a large water tank, he used to irrigate his land.

Ajjouli stated that in late April of this year, the army invaded his land, and informed him of their intention to demolish his property by May 30th.

He then filed an appeal, which included proof of ownership of his land, and various other documents, but the army demolished his property without a prior notice, or a final legal resolution to the matter.