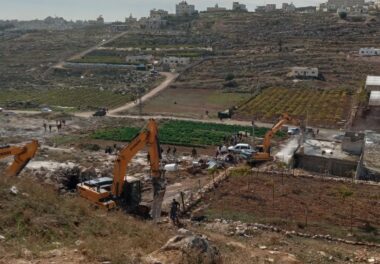 On Monday, Israeli soldiers demolished an agricultural shed in the Khallet Al- Forn village in Birin, east of Hebron, in the West Bank’s southern part.

Rateb Jabour, the coordinator of the Popular Committees against the Annexation Wall and Colonies in Southern Hebron, said the soldiers invaded the village and demolished an agricultural room owned by Gandhi Gheith.

Jabour added that the attack is part of ongoing violations by the soldiers and the illegal colonizers, especially since they are trying to expand the Pnei Hever colony, built on stolen Palestinian lands near the village.

The families said the army continues to demolish their property and bulldoze their lands and farms, although they have all the deeds providing ownership of their lands.

They called on local and international human rights and legal groups to intervene and provide them with the needed protection, especially amidst the constant displacement attempts, demolitions, and escalating assaults by the soldiers and the paramilitary colonizers.