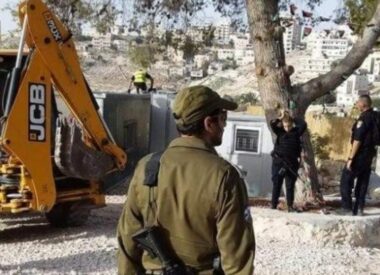 Israeli soldiers invaded, on Tuesday evening, the al-Khader Palestinian town, south of Bethlehem, south of occupied Jerusalem in the West Bank, and demolished an agricultural room, in addition to uprooting several olive trees and grapevines.

He added that the soldiers also uprooted many olive trees and grapevines in the same area, before withdrawing.

Salah stated that the army has recently escalated its violations against the Palestinians, their homes, and lands in al-Khader, including many abductions of the residents and the demolition of several structures, including sheds and rooms.