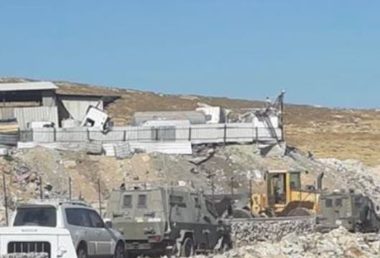 Israeli soldiers invaded, on Wednesday morning, the town of Anata, northeast of occupied East Jerusalem, and demolished a gas station.

Taha No’man, the mayor of Anata, said several army jeeps and three bulldozers invaded the northern area of the town, and demolished the gas station, which stood on three Dunams of Palestinian lands.

He added that the demolished structure, owned by Mohammad Ibrahim Hilwa, is located in Area C of the occupied West Bank, under full Israeli control, and although it was licensed by the Local Council, the army claimed it was not licensed by the Civil Administration Office, the administrative branch of the illegal Israeli occupation of the West Bank.

The soldiers also surrounded the area, and prevented the Palestinians from entering it, in addition to firing many gas bombs and concussion grenades.

It is worth mentioning that the demolished station consisted of several offices, and gas pumps, and was also connected to the sewage network in the area.