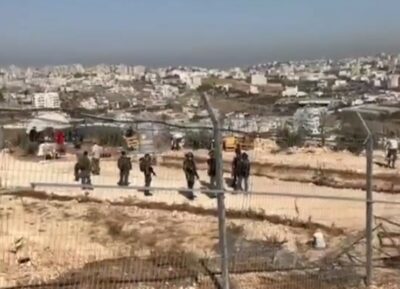 On Wednesday, Israeli soldiers invaded the Sindas Mountain area in Hebron city, in the southern part of the occupied West Bank, and destroyed a park.

Media sources said many army jeeps and heaving vehicles invaded the area before the soldiers stormed a park and confiscated tents, tables, chairs, and other supplies.

The sources added that the soldiers destroyed the park, demolishing its tents and sheds and uprooting its plans.

The sources added that the park is owned by Yosri al-Jamal, a journalist working for Reuters.

During the invasion, the soldiers surrounded and isolated the area to prevent the Palestinians from reaching it.