Soldiers Detain And Interrogate A Child Near Her Home In Hebron 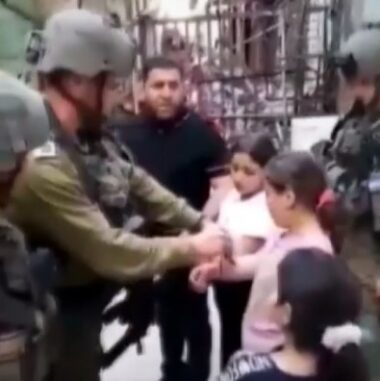 On Wednesday evening, Israeli soldiers detained and interrogated a Palestinian child in the yard of her home in the Shallala Street, in the center of Hebron city, in the southern part of the occupied West Bank.

Shadi Seder said many soldiers invaded and ransacked his home before abducting his daughter, Salwa, 12 years of age.

He added that the soldiers took his child to a military roadblock near Hebron Municipality while she was crying and screaming in fear as they dragged her away.

The Israeli army claimed the child “was carrying a knife” in the yard of her home.

The family denied the allegation, and the soldiers could not provide any evidence of the alleged knife before releasing the child.

The family is subject to constant violations by the soldiers and groups of fanatic illegal Israeli colonizers who constantly try to displace them and occupy their home.