Soldiers Detonate A Home Of A Detainee In Jenin 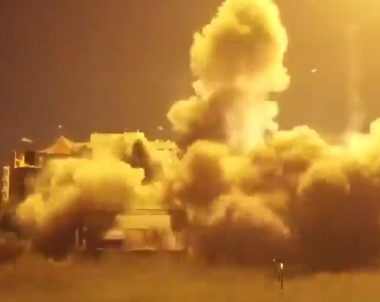 Dozens of Israeli soldiers, including military engineering corps, invaded at dawn Tuesday, the northern West Bank city of Jenin, and wired the family home of a Palestinian detainee, before detonating and turning it into rubble, in addition to causing damage to surrounding homes.

Media sources in Jenin said the soldiers surrounded the area and forced the family of detainee Ahmad al-Qonba’ out of their home, before wiring and detonating the property.

The explosion destroyed the property and leveled it to the ground, in addition to causing damage to four surrounding homes.

The demolished home was 160 square/meters and provided shelter to eight Palestinians.

The family received the demolition order from the military on April 12th, informing him that the demolition of their home will be carried out on April 17th, for what the army called “participating in the killing of a settler near Nablus.”

Video By The Israeli Army

They filed three appeals with the Israeli High Court, but the judges denied the appeals, basing the rulings on what the court called “insufficient documentation,” and because Ahmad was involved in “various security violations.”

Ahmad’s father. Jamal al-Qonba’, said the demolished property is owned by his disabled brother, and added that the family provided the army and the court with all legal documents.

The invasion and demolition led to clashes between the soldiers and local youngsters, who hurled stones at the soldiers.

Some fighters exchanged fire with the army and hurled pipe-bombs at the military vehicles, and the soldiers fired dozens of live rounds.

Furthermore, the soldiers abducted on Tuesday two Palestinian teenagers in the southern West Bank governorate of Hebron, and a young man in ‘Azzoun town, east of Qalqilia.