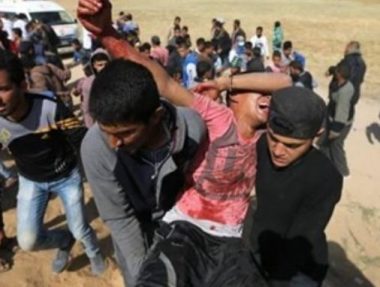 The Palestinian Health Ministry has confirmed that Israeli soldiers injured, Tuesday, nineteen Palestinians in several parts of the Gaza Strip.

It said the Palestinians were participating in the nonviolent “Great March of Return” which started on Palestinian Lad Day, on March 30, 2018.

It added that fifteen Palestinians suffered cuts and bruises, in addition to the severe effects of teargas inhalation.

On Monday evening, the soldiers shot one Palestinian east of Khan Younis, and abducted four teenage boys, east of the al-Boreij refugee camp, in central Gaza.

Also on Monday, the Palestinian Health Ministry has reported that a Palestinian teenager died from very serious wounds he suffered, on April 1st, after Israeli soldiers shot him during a nonviolent protest near the border fence, in Khuza’a village, east of Khan Younis.

The slain Palestinian, identified as Tahrir Mahmoud Wahba, 18, was shot in the head during a nonviolent procession, and remained in a very serious condition until his death at the European Hospital, in Khan Younis.

Israeli soldiers injured, Tuesday, three young Palestinian men with live fire, and caused many others to suffer the effects of teargas inhalation, in the northern and southern part of the Gaza Strip.

They added that the soldiers shot another Palestinian with a live round in his leg, and caused many others to suffer the effects of teargas inhalation, east of Khan Younis, in the southern part of the Gaza Strip.