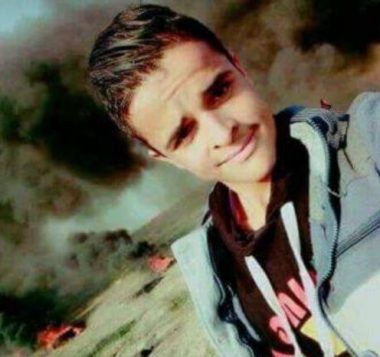 The Palestinian Health Ministry has reported that a Palestinian teenager died, Monday, from very serious wounds he suffered, on April 1st, after Israeli soldiers shot him during a nonviolent protest near the border fence, in Khuza’a village, east of Khan Younis, in the southern part of the Gaza Strip.

The Ministry said the Palestinian, Tahrir Mahmoud Wahba, 18, was shot in the head during a nonviolent procession, and remained in a very serious condition until his death at the European Hospital, in Khan Younis, in the southern part of the Gaza Strip.

The Palestinian, who is also deaf and cannot speak, was shot near the border fence east of Khuza’a town, east of Khan Younis. He was from Tal al-Sultan area, in nearby  Rafah. “My son cannot speak or hear, and I frequently tried to prevent him from protesting near the border area,” his mother said, “But he would get angry, and shake his head, refusing to stay home, and insisting on being part of the struggle.”

On Sunday at night, a young man, identified as Abdullah Mohammad Shamali, 20, from al-Barazil neighborhood, in Rafah died from serious wounds he suffered after Israeli soldiers shot him, Friday, April 27th.

The Health Ministry stated that the soldiers have killed 39 Palestinians, and injured more than 5000, including 138 who suffered serious wounds, since the “Great March of Return” protests started on Palestinian Land Day, on March 30th, 2018.