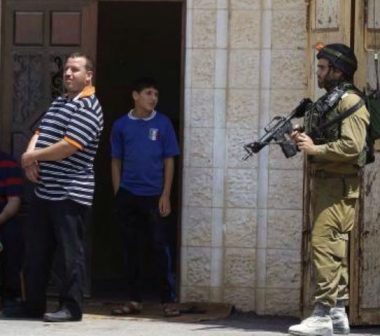 Israeli soldiers abducted, on Monday at dawn, at least twenty-three Palestinians from their homes in several parts of the occupied West Bank, including nine who were abducted in Jerusalem.

The Jenin office of the Palestinian Prisoners’ Society (PPS), in northern West Bank, said the soldiers stormed and ransacked many homes in the governorate, and abducted five Palestinians, including two siblings who are also former political prisoners.

In Qalqilia, also in northern West Bank, the soldiers abducted two young men, in their twenties, from their homes in the city.

Furthermore, the soldiers invaded Qarawat Bani Hassan town, west of Salfit in northwestern West Bank, and abducted Adnan Mer’ey, 21, after storming his home and searching it.

In Hebron, in the southern part of the West Bank, the soldiers invaded Halhoul town, north of the city, searched many homes and abducted Mamdouh Hasan Abu Asba, 25. Mohammad Adnan al-Baba, Ali Sobhi al-Baba, 30, and his brother Mahmoud.

In addition, the soldiers invaded the towns of Ethna, Halhoul, Doura and Yatta, and many neighborhoods in Hebron city, before installing roadblocks, stopping and searching dozens of cars, and interrogated many Palestinians while inspecting their ID cards.

On Monday morning, the soldiers invaded the Schools Street and the areas around the al-Quds University in Abu Dis town, southeast of Jerusalem, and injured several Palestinians with live fire and rubber-coated steel bullets, in addition to causing many to suffer the effects of teargas inhalation, after the locals protested the invasion.

In related news, Israeli army bulldozers invaded Palestinian lands, north of Beit Lahia town, in the northern part of the Gaza Strip, and uprooted sections near the border fence, in addition to installing sand hills.