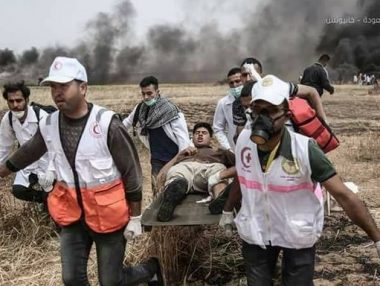 Israeli soldiers shot, on Monday evening, one Palestinian east of Khan Younis, in the southern part of the Gaza Strip, and abducted four teenage boys, east of the al-Boreij refugee camp, in central Gaza.

Media sources said the soldiers, stationed across the border fence, east of Khuza’a town, east of Khan Younis, shot a young man with live fire, before he was rushed by local medics to a Palestinian hospital.

In related news, the soldiers abducted four teenage boys, east of the al-Boreij refugee camp, reportedly after they crossed the border fence.

It is worth mentioning that the army pushed more soldiers, and armored vehicles across the border fence.