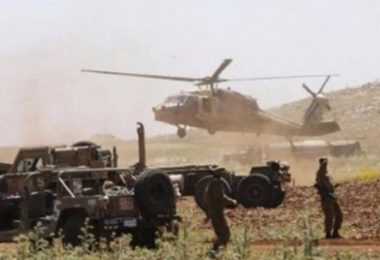 Israeli soldiers invaded, on Sunday at night, Hamsa al-Foqa Bedouin village in the West Bank’s Northern Plains and handed five families military orders informing them of intentions for hold live fire training in their area, and ordering them to leave on scheduled dates.

The soldiers ordered the families of Yasser, Abdullah, Adel and Taiseer Abu Kabbash, to leave their homes and dwellings on Tuesday, April 24th, May 1st and May 10th, from six in the morning until twelve in the afternoon.

It is worth mentioning that the army frequently displaces families in the area, and various parts of the Jordan Valley in addition to certain parts of the occupied West Bank, to hold live fire military drills.

In January of this year, the soldiers shot a Palestinian child with a live round in the head, during “military training” near Tubas.