Soldiers Dump Civilian Outside Refugee Camp, After Shooting And Abducting Him From Ambulance 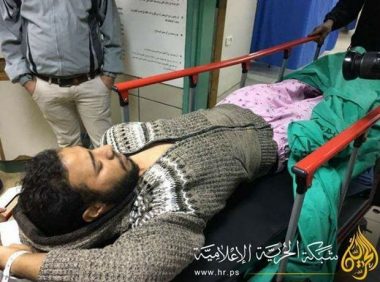 Israeli soldiers released, on Sunday at night, a young Palestinian man, who was shot and injured by army fire, on Sunday afternoon, by dumping him at the entrance of the al-‘Arroub refugee camp, north of Hebron, in the southern part of the occupied West Bank.

The Palestinian Red Crescent said that the soldiers threw the wounded man, Ahmad Abu Rayya, 20, at the main entrance of the refugee camp, before its medics were called to the scene and rushed him to the Hebron governmental hospital.

It is worth mentioning that Abu Rayya was abducted by Israeli soldiers at the Gush Etzion Junction, while he was being rushed to a hospital in Bethlehem.

He was shot by live Israeli army fire, in his leg, in the al-‘Arroub refugee camp.