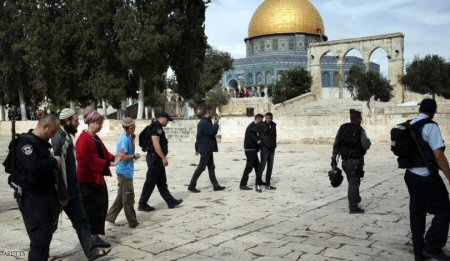 About 65 settlers and three members of Israeli security entered the compound in several groups, staging provocative tours in various areas of the yards, according to the Department of Islamic Endowments in Jerusalem.

The department pointed out,according to Al Ray, that Israeli police provided full protection to the extremists during the raid, which included explanations by Jewish guides about the alleged 3rd temple.

Israeli police impose restrictions on worshipers’ entry into the mosque, check their personal IDs, detain some at the gates, and do not allow mosque guards to approach the settlers.

Al-Aqsa Mosque is subjected to a series of extremist storm-ins during morning hours and afternoon periods in an attempt to impose the temporal and spatial division plan of the mosque.