Soldiers Injure A Palestinian With An Expanding Bullet Near Ramallah 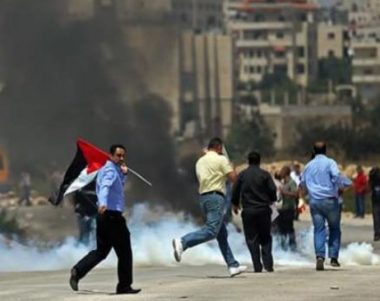 Israeli soldiers shot, on Friday afternoon, a young Palestinian man with an expanding bullet in his leg, and caused dozens to suffer the effects of teargas inhalation, at the northern entrance of the al-Biereh city, in central West Bank.

The army fired many live rounds, rubber-coated steel bullets and gas bombs at the protesters, after dozens of Palestinians nonviolently marched against the U.S. decision to move the consulate to occupied Jerusalem.

The Palestinians marched while carrying Palestinian flags, and chanting against the ongoing occupation, escalation and the illegal U.S. and Israeli policies in violation of International Law and the Fourth Geneva Convention.

In related news, the soldiers attacked another procession in Bab az-Zawiya area, in the center of the southern West Bank city of Hebron, and fired dozens of gas bombs and concussion grenades at them, wounding scores of Palestinians.

The soldiers also invaded several homes in the area, and occupied rooftops to use them as firing posts and monitoring towers.