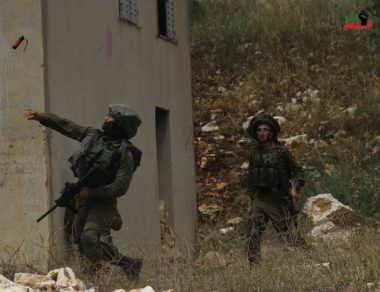 Israeli soldiers attacked, Friday, the weekly procession in Kufur Qaddoum town, east of Qalqilia in the northern part of the occupied West Bank, and shot two Palestinians with rubber-coated steel bullets in addition to causing dozens to suffer the effects of teargas inhalation.

The procession started in the afternoon, after Friday prayers, when the residents and international peace activists marched while chanting against the ongoing illegal Israeli occupation and the U.S. policies supporting it.

The army started firing rubber-coated steel bullets, gas bombs and concussion grenades at them, wounding two with rubber-coated bullets and causing scores to suffer the effects of teargas inhalation.

The soldiers also attacked many journalists, and prevented them with documenting the unfolding events.

It is worth mentioning that Kufur Qaddoum holds ongoing processions against the illegal occupation, and demanding the army to reopen the town’s main road, which was blockaded since 2003, to enable easy access for colonialist settlers driving to and from the illegal Kedumim colony, built on private Palestinian lands.