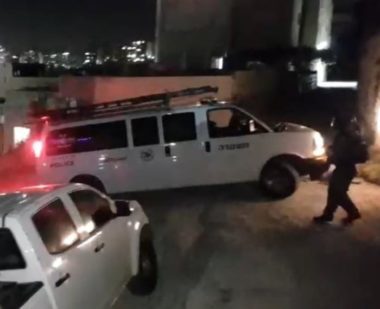 Many Israeli army jeeps invaded, on Saturday evening, the town of al-‘Isawiya in occupied East Jerusalem, and attacked the Palestinians with gas bombs and concussion grenades, causing dozens of injuries, including among many children.

The Wadi Hilweh Information Center in Silwan (Silwanic) said the invasion was carried out without a reason, especially since the situation in the town was calm, and no protests were taking place.

Silwanic added that the soldiers fired a barrage of gas bombs, especially in ‘Obeid neighborhood, causing many Palestinians, including children and women, to suffer the severe effects of teargas inhalation.

The soldiers also invaded the front yard of a home, owned by members of Abu al-Hummus family, and assaulted them with batons and pepper-spray, causing many injuries, including cuts and bruises.

The Palestinian Red Crescent Society (PRCS) said its medics provided the needed treatment to the wounded Palestinians and rushed two of them to a hospital.

It added that one of the Palestinians who were moved to a hospital is a known nonviolent activist, identified as Mohammad Abu al-Hummus, who suffered burns around his eyes.

The soldiers also assaulted and injured two young men, and abducted them, before moving them to an unknown destination.

It is worth mentioning that al-‘Isawiya has been subject to constant invasions and violations since last June, and the soldiers have abducted dozens of Palestinians from the town, in addition to summoning many others for interrogation.

During the invasions, the soldiers also distributed demolition orders targeting many homes and buildings, and included the firing of live rounds, in addition to gas bombs, concussion grenades, and rubber-coated steel bullets.