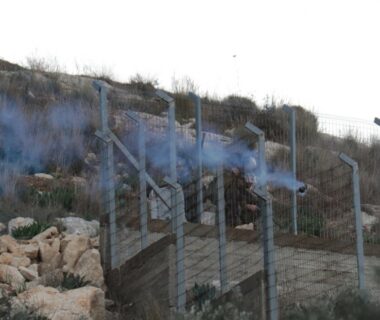 Israeli soldiers attacked, Friday, the weekly procession in Kufur Qaddoum, east of the northern West Bank city of Qalqilia, and injured four Palestinians including a child and a journalist, in addition to causing many to suffer the effects of tear gas inhalation.

Morad Eshteiwi, the media coordinator of the popular resistance committee in Kufur Qaddoum, stated that the Palestinians marched from the center of the village while chanting against the illegal Israeli occupation, its colonies, and escalating violations.

He added that the soldiers fired many rubber-coated steel bullets, gas bombs, and concussion grenades at the protesters.

Medical sources have confirmed that one child, 13, was shot with a rubber-coated steel bullet in the leg, in addition to a reporter, identified as Nasser Eshteyya, who was shot with a similar round in the arm.

Two other Palestinians were shot with rubber-coated steel bullets while dozens suffered the effects of tear gas inhalation.

Furthermore, the soldiers injured dozens of Palestinians during the weekly procession in Sbeih Mountain in Beita town, south of the northern West Bank city of Nablus.

In related news, the soldiers injured many Palestinians and caused damage to an ambulance during the weekly procession against the illegal colonies, in Beit Dajan village, east of Nablus.

In addition, the soldiers injured many Palestinians during protests that erupted in the Bab az-Zawiya area, in Hebron city, in the southern part of the occupied West Bank.