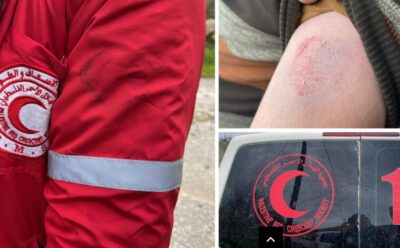 Israeli soldiers injured, Friday, many Palestinians, including a physician, and caused damage to an ambulance during the weekly procession against the illegal colonies, in Beit Dajan village, east of Nablus, in the northern part of the occupied West Bank.

Amad Jibril, the head of the Emergency Department at the Palestinian Red Crescent Society (PRCS) in Nablus, said the soldiers attacked the protesters with rubber-coated steel bullets, gas bombs, and concussion grenades.

Jibril added that several Palestinians, including Dr. Emad Abu Jeish, a volunteer with the PRCS, were shot with rubber-coated steel bullets, while dozens of Palestinians suffered the effects of tear gas inhalation.

He said that Dr. Abu Jeish was shot in the shoulder when he and other medics were helping wounded Palestinians and added that one ambulance sustained damage from the Israeli rubber-coated steel bullets.

The Palestinians in Beit Dajan hold weekly nonviolent processions after illegal Israeli colonialist settlers installed an outpost on their lands in October of the year 2020; the Israeli attacks against them caused hundreds of casualties, including several fatalities.