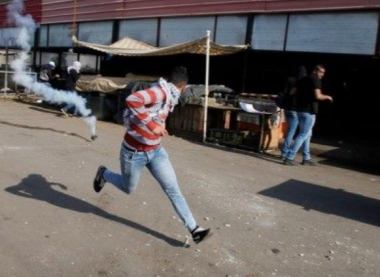 Palestinian medical sources have confirmed that Israeli soldiers shot, on Wednesday evening, a teen with live fire, two with rubber-coated steel bullets, and caused many to suffer the effects of teargas inhalation, in Beit Ummar town, north of the southern West Bank city of Hebron.

The Palestinians were marching near the military roadblock when the soldiers resorted to the excessive use of force against them.

The sources said that the soldiers shot the teenage boy, 16 years of age, with a live round in his thigh, after the army invaded ‘Aseeda area in Beit Ummar.

They added that the soldiers also shot two other Palestinians with rubber-coated steel bullets, and caused many to suffer the effects of teargas inhalation.

The soldiers also closed ‘Aseeda area, at the entrance of Beit Ummar, and forced all stores shut, before breaking into homes and occupying their rooftops.