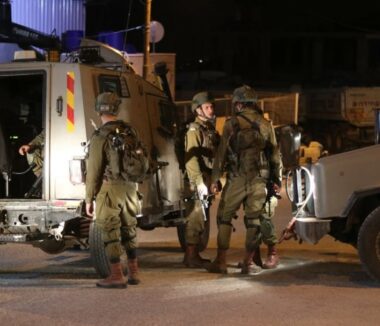 Israeli soldiers injured, on Thursday evening, many Palestinians in Douma village, south of Nablus, and abducted two at the nearby Za’tara permanent military roadblock, in the northern part of the occupied West Bank.

Daghlas added that the soldiers fired gas bombs and concussion grenades at the Palestinians, causing dozens to suffer the effects of tear gas inhalation.

In addition, the soldiers abducted Adham Luay Zakarna, from Qabatia town, and Mohammad Yousef Araysha, from Meithalun, south of the northern West Bank city of Jenin, after stopping them at the Za’tara military roadblock, south of Nablus.