Soldiers Injure Many Palestinians Near Jenin 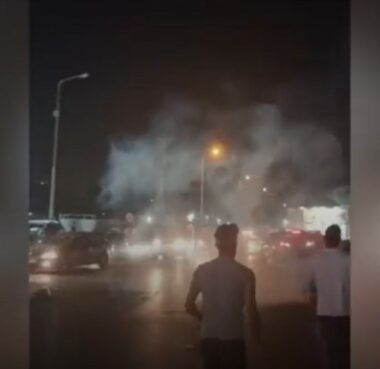 Israeli soldiers injured, on Friday at night, many Palestinians during protests that took place near Arraba town junction, south of the northern West Bank city of Jenin. The soldiers also abducted, Saturday, one Palestinian at a military roadblock.

They added that several Palestinians suffered the effects of tear gas inhalation, in addition to cuts and bruises, before receiving the needed treatment by local medics.

It is worth mentioning that the soldiers also invaded the villages of Rommana, Taybeh and Aneen, west of Jenin, and interrogated many Palestinians.

On Saturday, the soldiers abducted a young man, identified as Ezzeddin Emad Gharib, from Jenin refugee camp, while crossing the al-Hamra military roadblock in the Northern Plains of the West Bank.

In occupied Jerusalem, a group of Israeli colonizers attacked several Palestinians and injured one of them, before Israeli soldiers abducted five Palestinian men from the same family.