Israeli Colonizers Cause Damage To Many Palestinian Cars Near Jerusalem 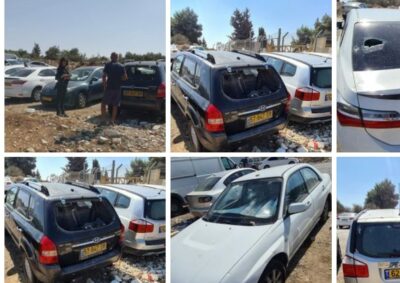 Local sources said the colonizers came from the illegal Har Shmuel colony which was built on the Palestinian lands.

They added that the Palestinians had to park their cars close to the colony due to ongoing closures and roadblocks by the Israeli army on the main road leading to Jerusalem city.

The attack is not the first, especially when the colonizers burnt, a few months ago, four Palestinian cars and caused damage to many other vehicles in the same area.

Beit Iksa is inhabited by nearly 2000 Palestinians and is isolated by the illegal Annexation Wall, in addition to being subject to constant violations by the soldiers and the colonizers.