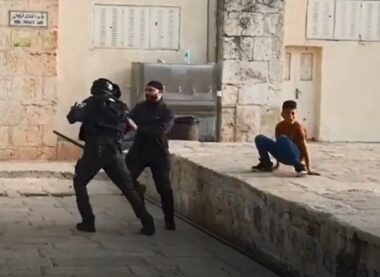 On Sunday, Israeli soldiers and police officers continued the invasions into the Al-Aqsa Mosque in occupied Jerusalem in the West Bank, wounding at least nineteen Palestinians, and abducting five.

The soldiers invaded the Al-Aqsa compound and attacked the Palestinian worshipers before surrounding and isolating the Al-Qibli Mosque and the worshipers.

The invasion was carried out to accompany dozens of illegal Israeli colonizers in the holy sites after the army, and the police surrounded and isolated the entire area and the Old City to prevent the Palestinians from entering them.

The Palestinian Red Crescent Society (PRCS) said its medics provided treatment to at least nineteen Palestinians and moved five of them to a hospital in the occupied city.

The PRCS said the soldiers also attacked its medics and tried to prevent them from rendering the needed first aid to the wounded Palestinians.

It is worth mentioning that dozens of soldiers, police officers, and undercover units invaded the courtyards of the holy site in the early morning hours Sunday and started attacking the Palestinian worshipers, in addition to forcing dozens to leave the holy sites while allowing dozens of illegal Israeli colonizers into its courtyards.

On Sunday dawn, the soldiers decided to prevent the Palestinians below 40 years of age from entering the holy site and attacked dozens of women and men.

The soldiers invaded the Dome of the Rock, the al-Qibli Mosque in the Al-Aqsa compound, before attacking the Palestinians and isolating them while allowing dozens of colonizers into the courtyards of the holy site.