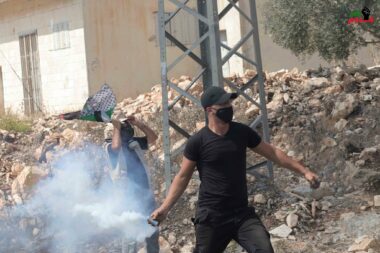 Israeli soldiers injured, Friday, seven Palestinians, including a journalist, and caused many to suffer the effects of teargas inhalation, after the army attacked the weekly procession in Kufur Qaddoum town, east of Qalqilia, in northern West Bank.

Murad Eshteiwi, the media coordinator of the Popular Committee against the Annexation Wall and Colonies in Kufur Qaddoum, said the protesters marched from the center of the village, carrying Palestinian flags, and chanting against the ongoing illegal Israeli occupation of Palestine.

The protesters also chanted against the normalization agreements between the Israeli occupation and some Arab states without guaranteeing the legitimate Palestinian rights of liberation, sovereignty, and independence in their own state. 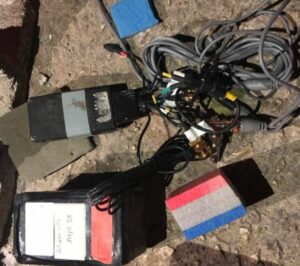 It is worth mentioning that, on Friday at dawn, the locals uncovered a hidden surveillance camera and equipment which were installed by the soldiers on a wall of a home in front of Omar Bin al-Khattab mosque where the weekly processions start.

Palestinians have been holding weekly demonstrations in Kufur Qaddoum village, since 2003, to demand the Israeli authorities reopen the village’s main road, which was closed in 2002, for the benefit of illegal settlers in nearby Israeli colonies, especially the Kedumim colony, which was built on private Palestinian lands.