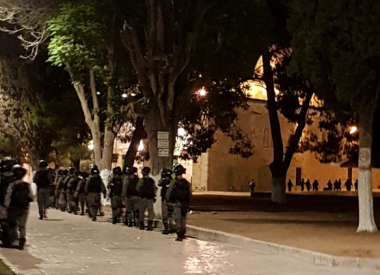 Israeli soldiers attacked, late on Friday at night, a Palestinian father, and his son, near the Chain Gate (Bab al-Silsila) one of the gates of the Al-Aqsa Mosque, in occupied Jerusalem, and abducted them.

Media sources said the soldiers stopped Bassem ‘Aseela and his son, Malek, 19, near the Chain Gate and assaulted them, before abducting and taking them to a nearby police station.

The abducted father and his son were heading to the Al-Aqsa Mosque when the soldiers attacked and abducted them.

On Friday evening, the soldiers abducted a young man, identified as Yousef ash-Shami, at a military roadblock near ‘Aneen village, west of the northern West Bank city of Jenin.