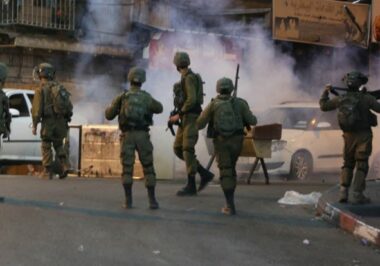 Israeli soldiers shot, on Monday at night, one Palestinian, and caused many to suffer the effects of tear gas inhalation, in addition to abducting two, in the al-Yamoun town, west of the northern West Bank city of Jenin. The army also abducted a young man at a roadblock south of Jenin

Media sources said several army jeeps invaded the town before the soldiers stormed and searched homes, and abducted Jamil Maher Khamaisa along with his son Mo’taz.

The invasion led to protests before the soldiers fired many rubber-coated steel bullets, gas bombs, and concussion grenades.

Medical sources said a young man was shot with a rubber-coated steel bullet in the neck and another young man with a gas bomb in the head, and dozens of Palestinians suffered the effects of tear gas inhalation.

Furthermore, the soldiers abducted Mohammad Shaher Obeid, from Anza village, south of Jenin, after stopping him at the Dotan military roadblock, near Ya’bad town.