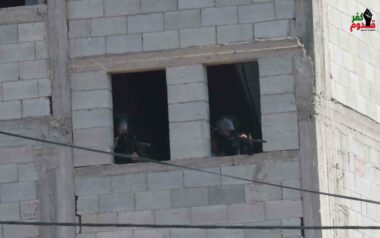 Morad Eshteiwi, the media coordinator of the Popular Committee in Kufur Qaddoum, said the soldiers invaded the town and attacked the Palestinians after they marched while chanting against the illegal Israeli occupation, and constant violations, including its illegal colonialist activities and the Annexation Wall.

He added that several young men hurled stones and empty bottles at the soldiers after they invaded the town and fired gas bombs and concussion grenades at the protesters.

The soldiers shot three young men with rubber-coated steel bullets and caused many to suffer the effects of tear gas inhalation.

The soldiers also invaded many homes and occupied their rooftops to use them as firing posts and military towers.

In addition, the army chased many Palestinians but the soldiers were unable to abduct any of them.