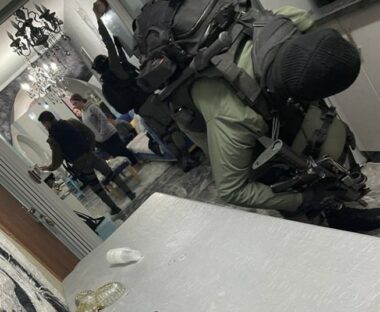 Israeli soldiers invaded, Sunday, the home of Jerusalem Governor, a member of the Revolutionary Council of the Fateh Movement, Adnan Gheith, and ransacked the property before abducting his nephew, only 12 years of age.

Media sources in Silwan town, south of the Al-Aqsa Mosque in the occupied capital, Jerusalem, said many army jeeps invaded the Gheith neighborhood, before storming and ransacking the home of Jerusalem governor, Adnan Gheith, and violently searched the property, causing damage.

The governor’s Media Advisor, Marouf Refa’ey, stated a large military force invaded the area and conducted a violent search of the governor’s home, in addition to removing furniture and throwing it out.

He added that the soldiers also abducted Gheith’s nephew, Mo’taz Sadeq Gheith, only twelve years of age, and took him to an interrogation facility.

It is worth mentioning that, in August of last year, the Israeli authorities renewed orders banning the governor from entering the West Bank, and from holding any meetings or participating in any activities in occupied Jerusalem, including banning him from trying to provide any aid to the families, subject to constant Israeli violations, including home demolitions and attacks by the illegal Israeli colonizers.

The order against the governor also specifies the names of 51 Palestinian figures, and bars him from entering any other part of the West Bank for three years, in addition to the severe restriction on his freedom of movement even in his town; he was given a map highlighting where he can and cannot be even in his town.

The violations against him started when he began his duties as the governor in the year 2018, and has since been abducted more than 28 times, during the dozens of invasions by the soldiers into his home.