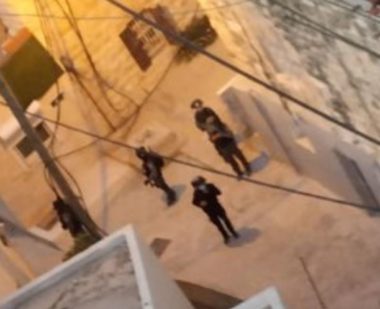 Dozens of soldiers invaded, on Saturday at night, the home of a young Palestinian man, on the first anniversary of his death by Israeli army fire, in the al-‘Isawiya town, in occupied East Jerusalem.

Eyewitnesses said the soldiers stormed and ransacked the home of Mohammad Samir Obeid, who was only 21 years of age when the army killed him a year ago.

They added that the soldiers violently searched and ransacked the property, and interrogated the family while inspecting their ID cards.

The invasion led to protests between many Palestinian youngsters and the soldiers who fired a barrage of gas bombs, concussion grenades, rubber-coated steel bullets and a few live rounds.

The protesters hurled stones at the invading army jeeps, while a few of them used fireworks against the soldiers before the troops withdrew from the town.

Mohammad Samir Obeid, 21, was killed by Israeli soldiers on June 27, 2019, during a protest in Jerusalem, when the soldiers shot him with several bullets, including a live round in the heart.

After killing the young man, the soldiers took his body away, and assaulted several Palestinians with clubs and batons.

An eyewitness, who was standing next to the slain Palestinian, said the soldiers shot him with three live rounds from a close range, including the fatal round in the heart, and one that struck him in his leg, and added that the shooting had no cause or justification, especially since it was carried out an hour after the nonviolent protest ended.