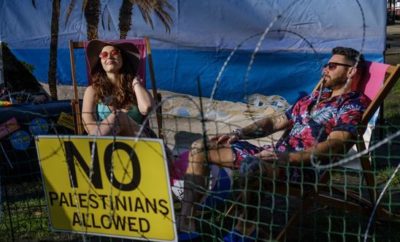 This call to action was posted today by Amnesty International:

As Israel steps up construction of illegal settlements in the Occupied Palestinian Territories (OPT), in brazen defiance of international law, Amnesty International is calling on TripAdvisor to urgently remove its listings in settlements and send a clear message that it will no longer contribute to human rights violations.

With a sharp increase in settlement expansion underway, and persistent attacks on Palestinians and their properties by some Israeli settlers, it is more important than ever that companies do not further legitimize settlements by doing business in them.

“Israeli settlements violate international law and amount to war crimes. Companies which operate in the settlements are contributing to human rights violations and tacitly supporting Israel’s policy of forcing Palestinians out of their homes and crushing their basic rights,” said Saleh Higazi, Amnesty International’s Deputy Regional Director for the Middle East and North Africa.

“It is shameful that TripAdvisor has failed to update its policies, even as Israel forges ahead with increasingly aggressive land grabs that will intensify the suffering of Palestinians. Trip Advisor must comply with its responsibility to respect human rights and refrain from contributing to war crimes.”

Since 1967 tens of thousands of Palestinian properties have been demolished and whole communities forcibly displaced to make way for illegal settlements. Natural resources have been diverted and appropriated to settlements, which flourish while Palestinians communities face systematic and institutionalized human rights violations.

International law is clear that establishing settlements in occupied territory is illegal and constitutes a war crime, and the international community has long opposed these violations.

Earlier this year the UN published a database listing more than 100 companies with business links to settlements, including TripAdvisor. Listed companies which continue their involvement in settlements are knowingly breaching their international obligations to “avoid causing or contributing to adverse human rights impacts through their own activities and address such impacts when they occur”.

Amnesty’s research shows that the tourism industry plays an important role in driving settlement expansion by drawing in visitors who boost their economies, and by legitimizing and normalizing the existence of settlements. TripAdvisor is the most visited online tourism website by foreign visitors to Israel, and it promotes at least 70 places to stay or things to do in Israeli settlements.

Following the publication of Amnesty’s report in 2019, TripAdvisor said:

“We understand that this issue is a sensitive matter with cultural and political implications.  The listing of a property or business on TripAdvisor does not represent our endorsement of that establishment.”

Since then the company has not changed any of its policies and TripAdvisor’s website continues to carry listings which present what are, in effect, crime scenes, as exciting tourist destinations. For example, it lists a vineyard and an archaeological site in Susya in the southern Hebron hills, an ever-expanding settlement which has forced generations of Palestinians out of their homes and continues to cause human rights violations for the displaced community. It is a site which Palestinians are not allowed to enter – including those ex-residents of the village on whose ruins the site was constructed.

“TripAdvisor’s response completely ignores the hard facts of international law, as well as the fact that its own listings pump money into the settlement economy,” said Saleh Higazi.

“While tourists in Susya settlement enjoy wine and a swimming pool, Palestinians on the other side of a barbed wire fence live in makeshift shelters slated for demolition and struggle to find clean water. Tourism is sustaining this outrageous situation.”

Shortly after the release of Amnesty’s report, Israel placed Israel/OPT campaigner Laith Abu-Zeyad under a punitive travel ban. Laith, who lives in the West Bank, has been given no justification for the ban nor a meaningful opportunity to challenge it.

Laith’s case shows the brutal reality of the Israeli occupation. TripAdvisor is contributing to a system which displaces, traps and traumatizes millions of Palestinians

Not only can he not travel abroad, he was barred from crossing into Jerusalem to visit his mother before she died, for undisclosed “security reasons”. There is every reason to believe the ban is a response to Laith’s human rights work and Amnesty’s documentation of violations by Israel.

“Laith’s case shows the brutal reality of the Israeli occupation. TripAdvisor is contributing to a system which displaces, traps and traumatizes millions of Palestinians, and punishes those who speak out,” said Saleh Higazi.

According to Peace Now, there has been a sharp increase in settlement expansion since the beginning of the year, and the release of US President Donald Trump’s so-called “deal of the century”. At the same time, violence perpetrated by settlers against Palestinians has continued throughout the OPT, including East Jerusalem, with Israeli authorities rarely intervening. According to the UN Office for the Coordination of Humanitarian Affairs, since the release of the Trump deal there have been at least 250 incidents involving violence, intimidation or trespass carried out by Israeli settlers.

The Israeli government soon plans to put in motion its proposed annexation of large swathes of the West Bank. The plan was set out in the Trump Administration’s so-called “peace deal” which was announced without Palestinian consultation and has been rejected by most of the international community. International law prohibits annexation of occupied territory in any circumstances.

“Against this backdrop it is more important than ever that businesses update their policies and cease activities in the settlements, to make it clear that they do not support Israel’s flagrant violations of international law,” said Saleh Higazi.

“By continuing to do business with settlements TripAdvisor is siding with the abusive policies of the Israeli government and the Trump administration, ignoring the suffering of Palestinians, and going against international law.”