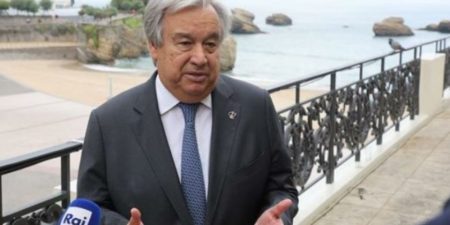 The United Nations (UN) Secretary-General, Antonio Guterres, appealed to the occupation state of Israel, to scrap its West Bank annexation scheme, pointing out that this act would constitute a “most serious violation of international law.”

Guterres expressed his hope for new negotiations, with the final aim being the long-proposed two-state solution.

One day before the UN chiefs comments, thousands of Palestinians gathered in the Jordan Valley to show their objection to the Israeli threat of expropriation of more Palestinian land.

Recently, hundreds of legal scholars signed an open letter condemning the Israeli intentions to annex Palestinian territory in the West Bank, calling it a “flagrant violation of bedrock rules of international law, and would also pose a serious threat to international stability in a volatile region”.