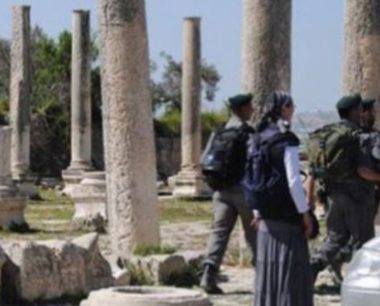 Mohammad Azem, the head of Sebastia Town Council, said dozens of soldiers invaded the area and fired a barrage of gas bombs at the Palestinians to force them away.

He added that many Palestinians protested the invasion, and hurled stones at the soldiers who fired live rounds and more gas bombs.

It is worth mentioning that the archeological area in Sebastia is subject to frequent invasions by Israeli soldiers and colonialist settlers, and the Palestinians are always forced away during their assaults.

In related news, the Palestinian Prisoners’ Society (PPS) has confirmed that Israeli soldiers abducted, on Monday at dawn, at least 45 Palestinians from several parts of the occupied West Bank, including twenty-two from the al-‘Isawiya and Silwan towns, in occupied East Jerusalem.