Soldiers Invade Two Jerusalem Towns, Abduct Palestinian After Attacking Him And His Family 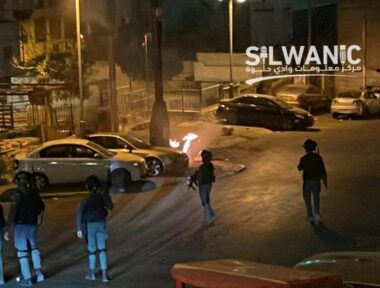 On Wednesday dawn, Israeli soldiers invaded the At-Tour and Silwan towns in occupied Jerusalem in the West Bank, leading to protest, before the soldiers abducted one Palestinian after attacking him and his family.

They added that several young men managed to burn a pole with surveillance cameras installed by the police.

In Silwan town, the Israeli army and police vehicles invaded the Ein al-Louza and Be’er Ayyoub neighborhoods before stopping and searching dozens of cars, in addition to interrogating many young men, the Wadi Hilweh Information Center In Silwan (Silwanic) has reported.

Silwanic added that soldiers randomly fired several gas bombs and concussion grenades, especially in alleys and in front of a few homes.

Many Palestinians protested the invasion, and some hurled Molotov cocktails at a security vehicle for illegal colonies in the town and used fireworks to counter the invading army and police vehicles.

The soldiers also stormed and ransacked many homes in the town and abducted a young man, Ashraf Buran, after assaulting him and his family.

In related news, the soldiers shot four young men, including two with live fire, during protests that erupted after the army invaded Beit Ummar town, north of Hebron, in the occupied West Bank.