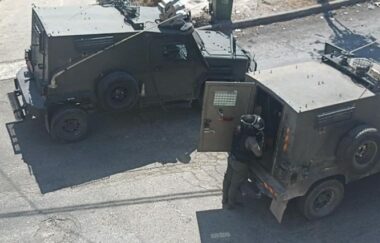 On Tuesday night, Israeli soldiers shot four young men, including two with live fire, during protests that erupted after the army invaded Beit Ummar town, north of Hebron, in the occupied West Bank.

Dozens of Palestinians marched in the Aseeda area in Beit Ummar, protesting the escalating Israeli crimes and violations against the Palestinian people, including the Tuesday dawn invasion of Nablus in which Israeli soldiers killed five Palestinians and injured twenty-one, including four who suffered life-threatening wounds.

Awad added that the soldiers shot two Palestinians with live fire; one of them, 19 years of age, was shot in his leg, and the bullets caused serious fractures to his bones before he was rushed to a hospital in Hebron city.

He also said that the other Palestinian was shot with live fire in the leg and received treatment in a local clinic before he was discharged.

Two Palestinians were shot with rubber-coated steel bullets, one in the should and one in the army before Palestinian Red Crescent Medics provided them with the needed treatment.

Many Palestinians suffered the severe effects of tear gas inhalation.