Soldiers Abduct A Student, Injure Many, In Jerusalem 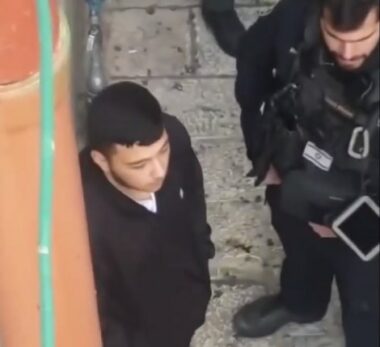 On Tuesday, Israeli soldiers abducted a student and attacked a school bus wounding many schoolchildren in two separate attacks in occupied Jerusalem in the West Bank.

Media sources said the soldiers stopped a Palestinian near Bab Hutta near the Al-Aqsa Mosque and took him to an unknown destination.

The sources added that the student, who remained unidentified at the time of this report, was heading to his school when the soldiers abducted him and took him to a detention facility.

Furthermore, the soldiers fired gas bombs at a school bus in Anata town, northeast of Jerusalem, causing many children to suffer the effects of tear gas inhalation.

Also. the soldiers invaded the Khallet Al-Qa’ir area near Yaqin community in Bani Neim town, east of Hebron in the southern part of the occupied West Bank, and demolished an under-construction home.

In addition, the soldiers shot a Palestinian worker near a section of the illegal Annexation Wall, west of Hebron, in the southern part of the occupied West Bank, and abducted him.