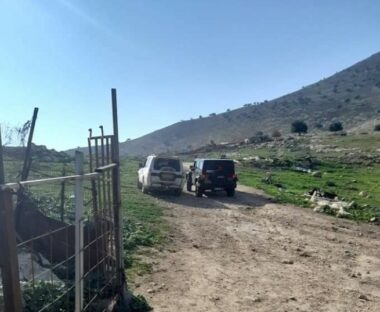 Several Israeli military vehicles invaded, on Wednesday at dawn, the ar-Ras al-Ahmar Palestinian village, in the Northern Plains of the occupied West Bank, before the soldiers confiscated agricultural equipment in addition to cars, tractors, and water tanks.

Mo’taz Bisharat, a Palestinian official who monitors Israel’s violations and colonialist activities in Tubas and the Northern Plains, said the soldiers invaded the village before breaking into and ransacking many homes, barns and structures.

Bisharat added that the soldiers confiscated several cars, tractors, and water tanks owned by the local Palestinian shepherds and farmers.

It is worth mentioning that the village is subject to repeated Israeli violations, including constant invasions, demolitions, abductions, the uprooting and bulldozing of lands, and the abduction of many of its residents.