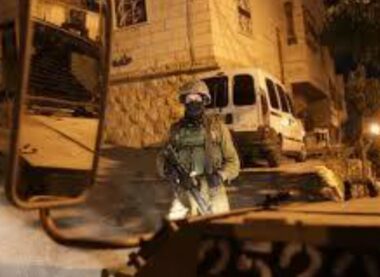 Several Israeli army jeeps invaded, on Saturday evening, the village of Burqa, northwest of Nablus, in the northern part of the occupied West Bank, leading to protests, and closing its main road.

The soldiers also closed the main road leading to the village, in addition to obstructing traffic on the Jenin-Nablus Road.

It is worth mentioning that the army has been escalating its invasions, violent searches of homes and property, and the abduction of the residents in addition to the severe restriction of the movement of the Palestinians in Burqa, surrounding villages and towns, in an act of illegal collective punishment since December 16th, 2021, after an Israeli colonist, identified as Yehuda Dimantman, 20, was killed near the evacuated Homesh colonialist outpost, which was built on Palestinian lands north of Nablus.

In related news, the soldiers installed a roadblock on the main road of the ar-Ram town, north of the occupied capital, Jerusalem, before stopping and searching dozens of cars, and interrogated many Palestinians while inspecting their ID cards.