Soldiers Map House Of A Detainee In Preparation For Demolishing It 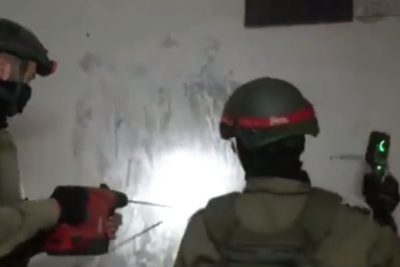 On Thursday at dawn, Israeli soldiers invaded Ya’bad town, southwest of the northern West Bank city of Jenin, and mapped out the house of Nathmi Abu Bakr, a 49-year-old Palestinian imprisoned by Israel.

The Israeli army is claiming that Abu Bakr is the Palestinian who dropped a brick on soldiers invading the town, in May of 2020, killing one, identified as Amit Ben Ygal, 21,

The Israeli Shin Bet security agency claimed that Abu Baker was the person who dropped the brick from the rooftop of his own home, during the invasion.

Hours after the incident, the IOF launched repeated wide-campaigns of violent invasions and detentions in the town.

Lawyer for the Commission of Detainees and Ex-Detainees Affairs, Khaled Mahajneh, refuted the Israeli allegations that link Abu Bakr, and said that these allegations are fabricated, adding that prisoner Abu Bakr is totally denying all the charges directed against him.

The detainee has been subjected to harsh living conditions and interrogations since he was taken prisoner and is being held in a cell that lacks key ingredients to life.

He also has been prevented from meetings with his lawyer for a period that lasted for more than two weeks.