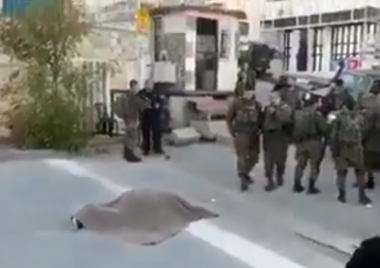 Israeli soldiers shot and seriously injured, Friday, a young Palestinian man reportedly after he attempted to stab them in Hebron city, in the southern part of the occupied West Bank.

Israeli media sources quoted the army stating that “the Palestinian was neutralized after a suspected stabbing attack.”

Although initial news indicated that the Palestinian, identified as Sufian Ghazi Skafi, 35, was killed, the Palestinian Civil District Coordination Office said the man is in a serious condition after the soldiers shot him in his abdomen and legs.

Soldiers and armed colonialist settlers surrounded the Palestinian and prevented Palestinian medics from reaching him.

The incident took place near an Israeli police station close to Keryat Arba’ illegal colony in Hebron; dozens of soldiers rushed to the scene, before one of them covered the entire body of the wounded Palestinian, including his head, with a sheet, although he was not dead.

The Palestinian was later moved by the army to the Israeli Shaare Zedek medical center.