Soldiers Shoot A Palestinian With An Expanding Bullet Near Ramallah 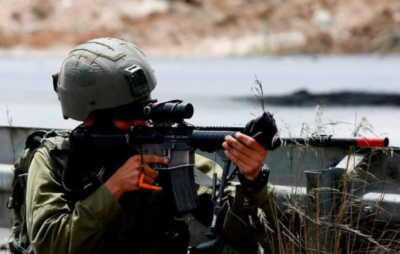 Israeli soldiers attacked, Friday, many Palestinian protesters in Nabi Saleh village, northwest of the central West Bank city of Ramallah, and shot a young man with an expanding bullet, in addition to causing several others to suffer the effects of tear gas inhalation.

Bilal Tamimi, a local nonviolent activist against the illegal Israeli Annexation Wall and colonies, said the soldiers attacked the nonviolent protesters in the al-Jabal area in the village, and fired the illegal expanding rounds, in addition to gas bombs and rubber-coated steel bullets.

Tamimi added that the soldiers shot a young man with the “Toto” expanding bullet in the thigh, causing a moderate wound before he was rushed to a hospital in Ramallah.

Many Palestinians suffered the effects of tear gas inhalation, and others sustained cuts and bruises, before receiving the needed treatment by local medics.

In related news, the soldiers fired gas bombs at Palestinians, who marched in the al-Mughayyir village, northeast of Ramallah.