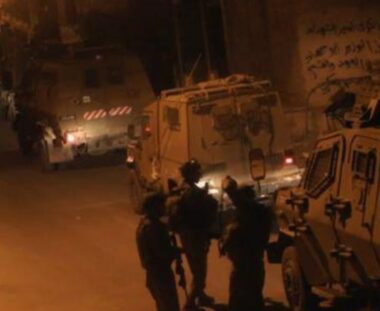 Israeli soldiers invaded, on Thursday at dawn, Tubas city in the northeastern West Bank, leading to protests, before shooting a young man with a live round.

Media sources said several army jeeps invaded the city before the soldiers shot the young man with a live round in the arm during protests that erupted after the soldiers stormed and searched homes.

Kamal Bani Odah, the head of the Tubas office of the Palestinian Prisoners Society (PPS) said the soldiers invaded and ransacked the homes of two siblings, identified as Hatem and Samer Abu Khader, in addition to Sameh Samer Abu Khader.

In related news, the soldiers invaded the Jabal al-Mawaleh area, in the center of Bethlehem city, south of occupied Jerusalem in the West Bank, before storming and ransacking the home of a political prisoner, identified as Jawad Jawareesh, and his brother Mahmoud, in addition to Moayyad Rezeq.